Find this article at:
go.ncsu.edu/readext?847303
— Written By Matt Bertone

Last year (2021) was a busy one for us at the Plant Disease and Insect Clinic (PDIC). It was also eventful: all lab members returned to full-time work in the clinic around July (following approved COVID safety guidelines) and we welcomed a new, full-time pathologist, Dr. Swarna Moparthi!

In total, the Plant Disease and Insect Clinic and Turf Diagnostic Lab received 2,820 samples last year. Below are summaries of samples we received in 2021 and results coming from these samples, including the some of the pests and pathogens we’ve identified. Note that most of these summaries do not include turf samples. For a summary of 2021 from the NC State Turf Diagnostic Lab, please see their annual review.

The PDIC processed 2,435 samples. Ninety-eight percent (98%; 2,388) of the samples we received in the PDIC came from within North Carolina and every county (n=100) in the state submitted at least one sample in 2021. Numerous counties submitted multiple samples throughout the year, with Wake county submitting the most (262). Here are counties that submitted the most samples: 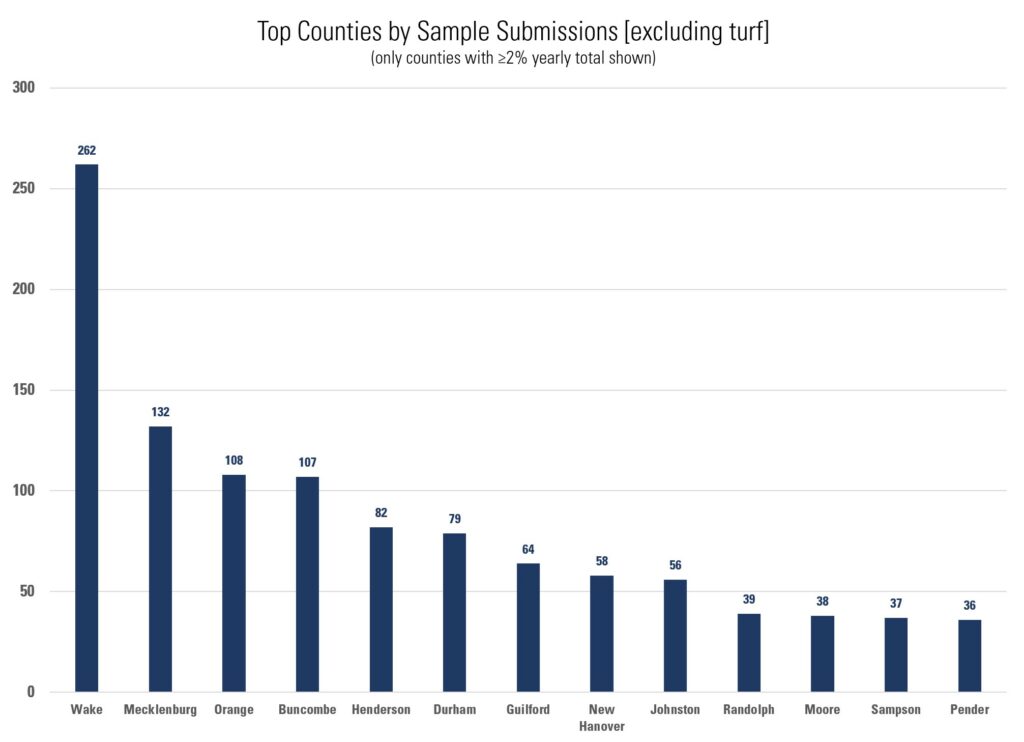 Not surprisingly, samples were submitted most often in the summer, during the growing season and while folks were out and about in their yards. June saw the most samples submitted, with 358 or over 10 per day! 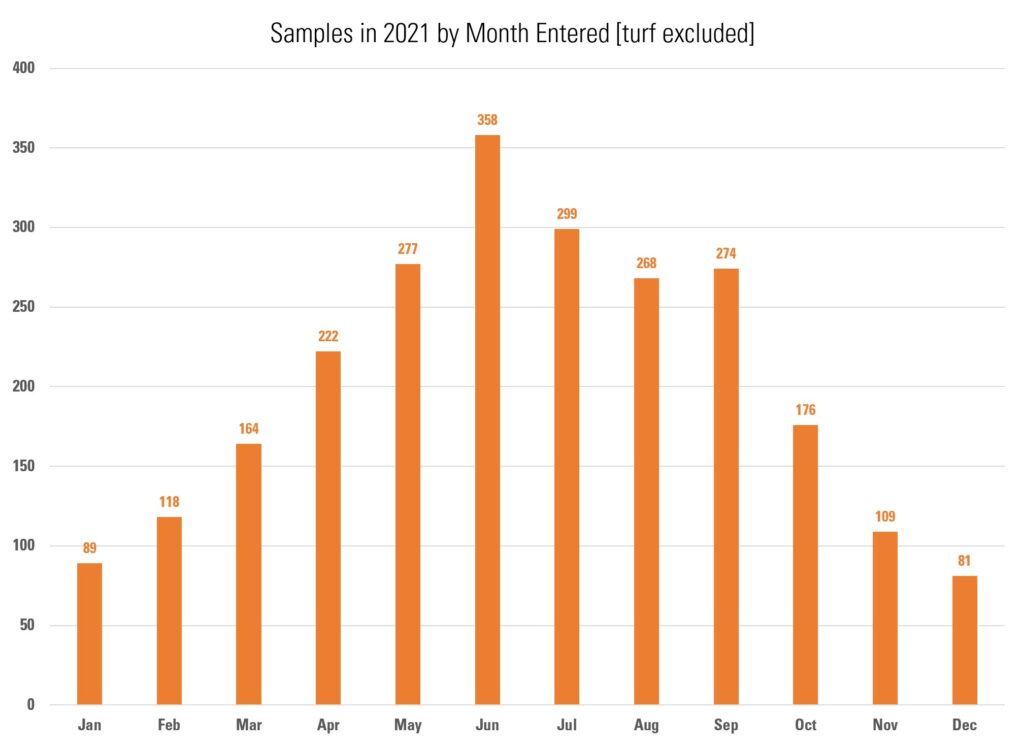 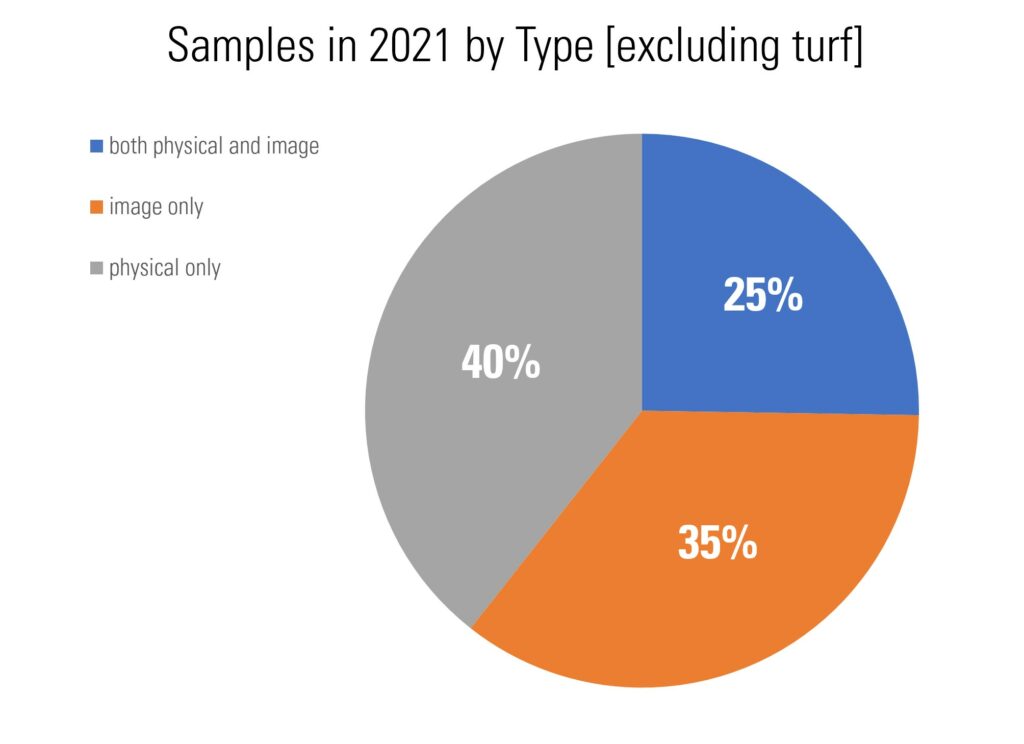 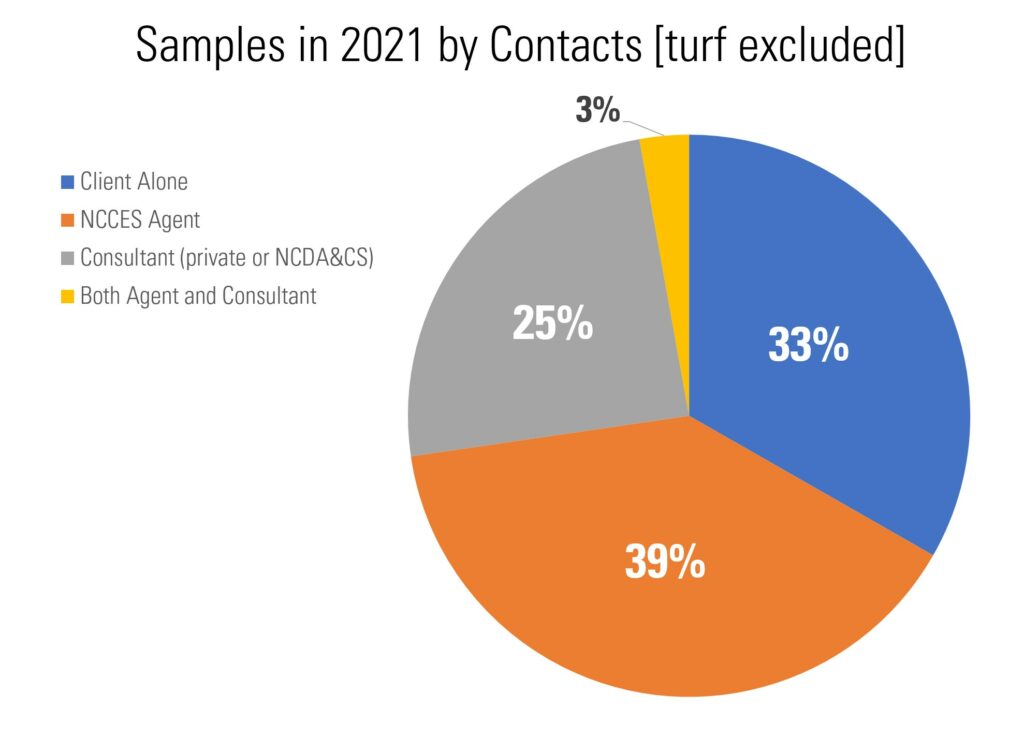 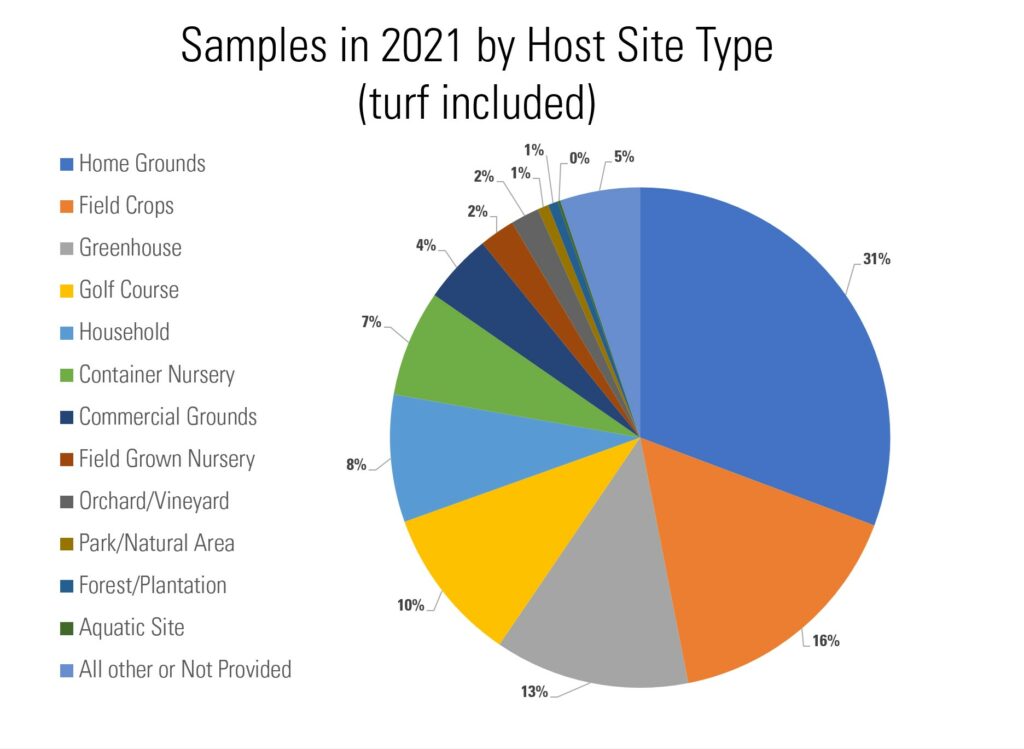 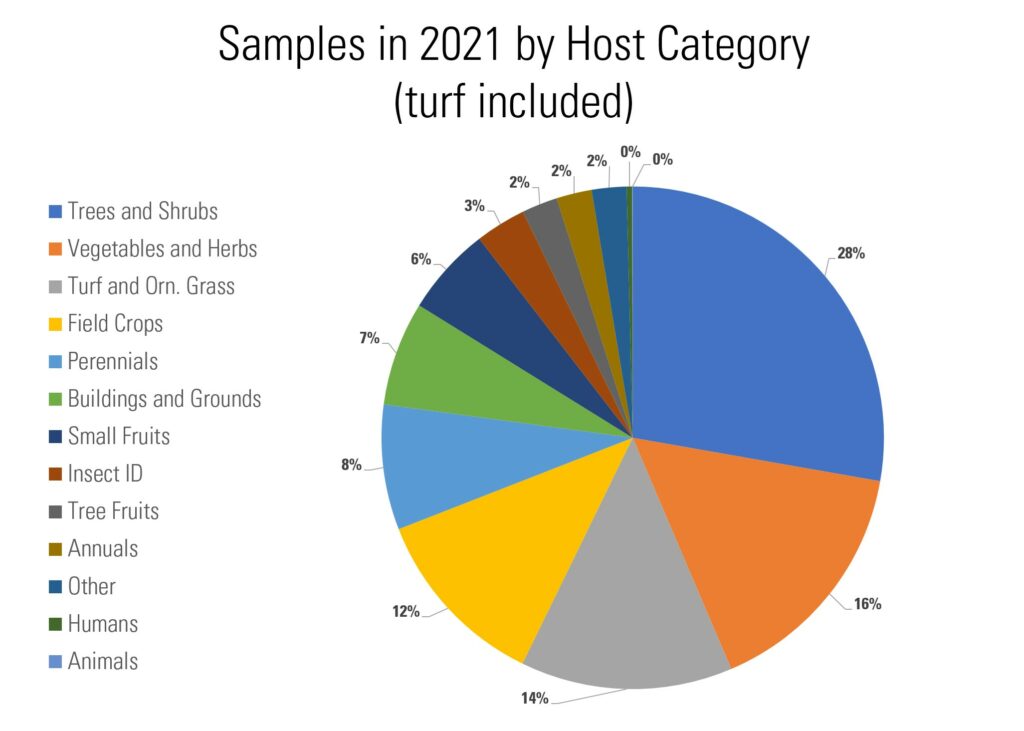 The top 40 “hosts” submitted to the clinic can be seen below. In addition to these common hosts, we received 124 host genera that were represented by only a single sample in 2021. 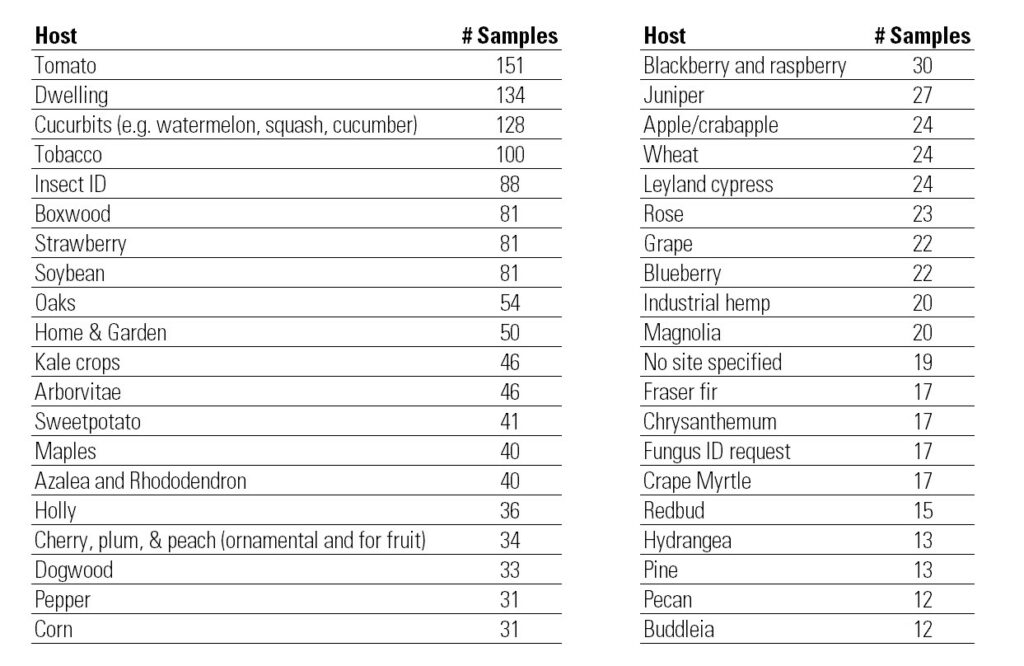 Samples processed through our lab for diagnosis may have one or several issues identified. In 2021, the majority of samples (75%) had only a single pest (i.e. pathogen, arthropod, etc.) diagnosed on them. Two pests were diagnosed on about 19% of samples, while about 6% of samples had three or more diagnoses (up to nine in one case!).

One of our top sites that we diagnosed samples from was households. Since we provide a mold identification service for state residents, the most common diagnoses were molds that were not listed in the pest dictionary. We’ll begin adding those species for better data collection, but in addition Penicillium and Cladosporium were very often present indoors.

There’s a wide diversity of arthropods found in households, but no single species/pest was found abundantly in 2021 except springtails (Entomobryidae; see graph). Other than springtails, 107 diagnoses of 78 arthropod taxa were made from households. Unfortunately “miscellaneous debris” was identified several times, associated with samples of suspected home parasites that never yielded any pests. 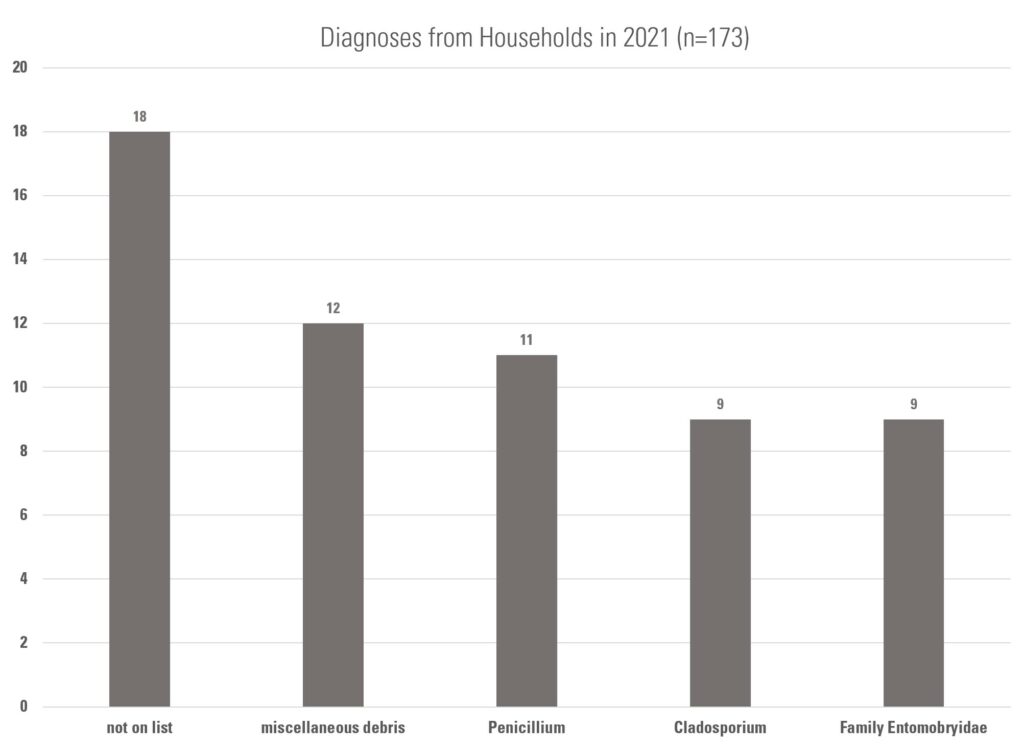 Declining boxwoods (Buxus spp.) were commonly sent in to the clinic, many for identification of the destructive disease boxwood blight (Calonectria pseudonaviculata). There was state-wide, active screening of samples for this disease as well. Many other issues were either abiotic in nature, or we were unable to identify the cause of the problem due to lack of sufficiently good samples. Otherwise, several diseases, nematodes, and scale insects were identified from boxwoods. 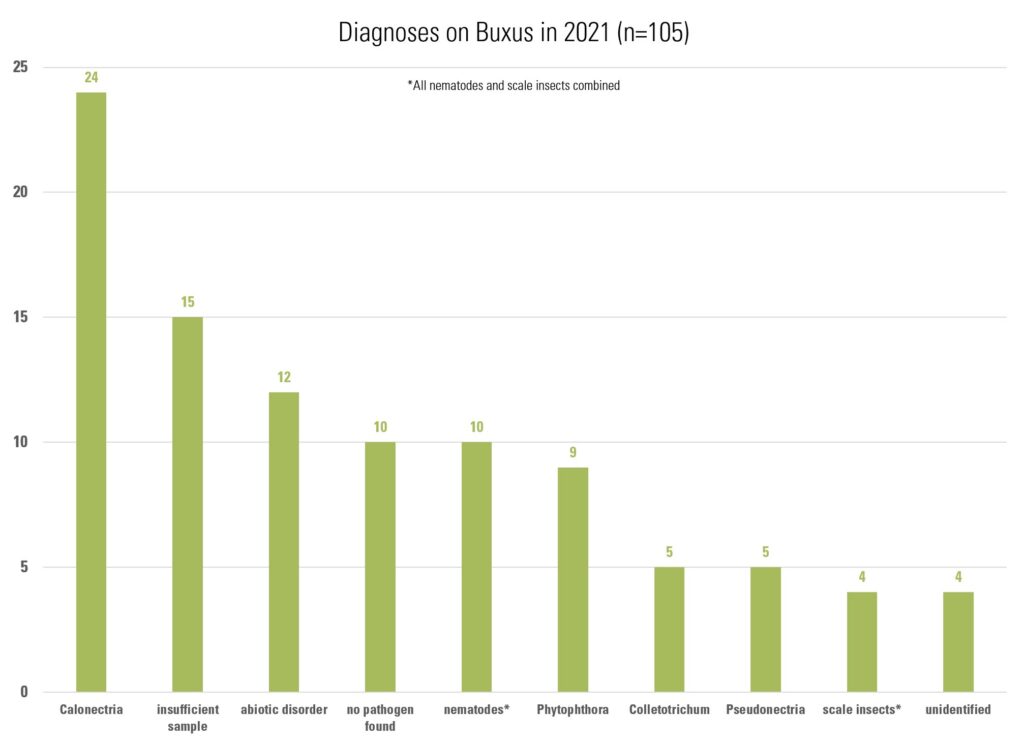 Another popular landscape plant, both in terms of plantings and number of times it was submitted, was arborvitae (Thuja spp.). These evergreen conifers are commonly planted as natural barriers and, although they do get some serious diseases, the most common diagnosis was “abiotic disorders” which included natural shading out of needles. This phenomenon is a constant confusion for clients who assume a disease is involved, when really the plants lose needles naturally despite being “evergreen”. Serious diseases of arborvitae were identified, though, on several occasions. These were most often due to two root diseases, Phytophthora and Armillaria, that can easily kill plants. It was notable that in 2021, Phytophthora was more prevalent than Armillaria on arborvitae, but five of the Phytophthora cases were from nurseries (4 container and 1 field). 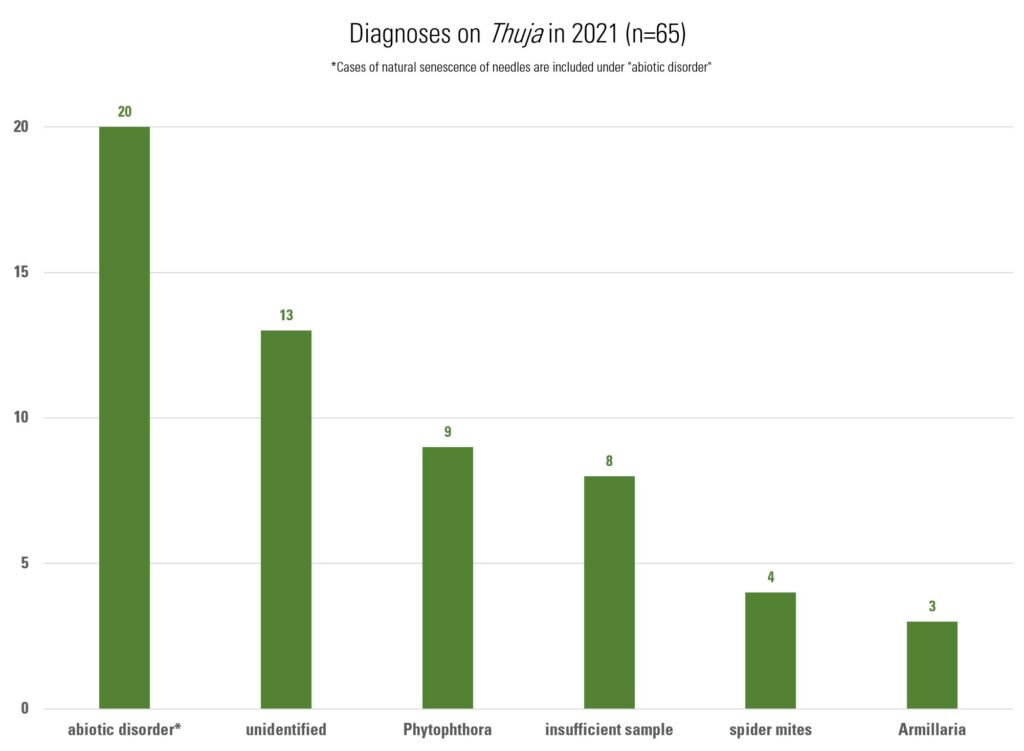 Tomatoes were the most commonly submitted plants in 2021 and, as such, numerous pests and pathogens were found in this host. Abiotic and other disorders were the most commonly identified issues. Beyond that were several plant pathogens that are common in tomatoes, including the thrips-transmitted Tomato Spotted Wilt Virus (TSWV), bacterial agents (Ralstonia and Xanthomonas), and several fungi (Alternaria, Botrytis, and Sclerotium). 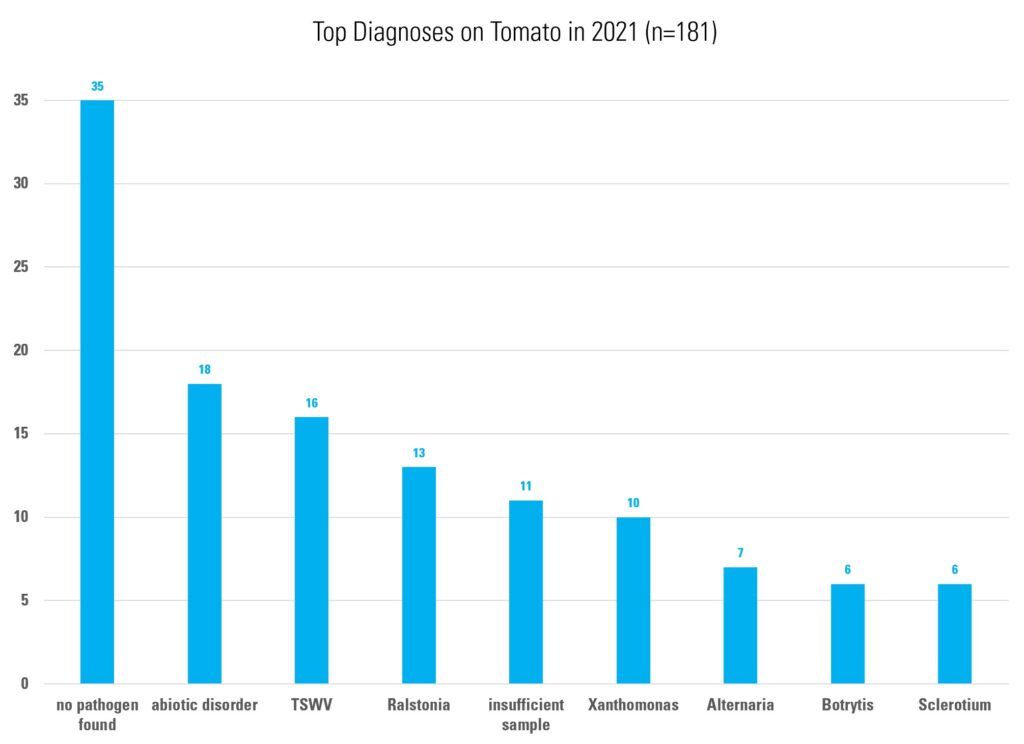 Strawberries were affected by many abiotic agents, but otherwise were diagnosed with numerous common fungal pathogens as well as bacteria. One surprise this year was high populations of tarnished plant bugs (Lygus lineolaris) in the crop; their feeding caused abundant damage to the fruits, distorting their growth and making them unmarketable. 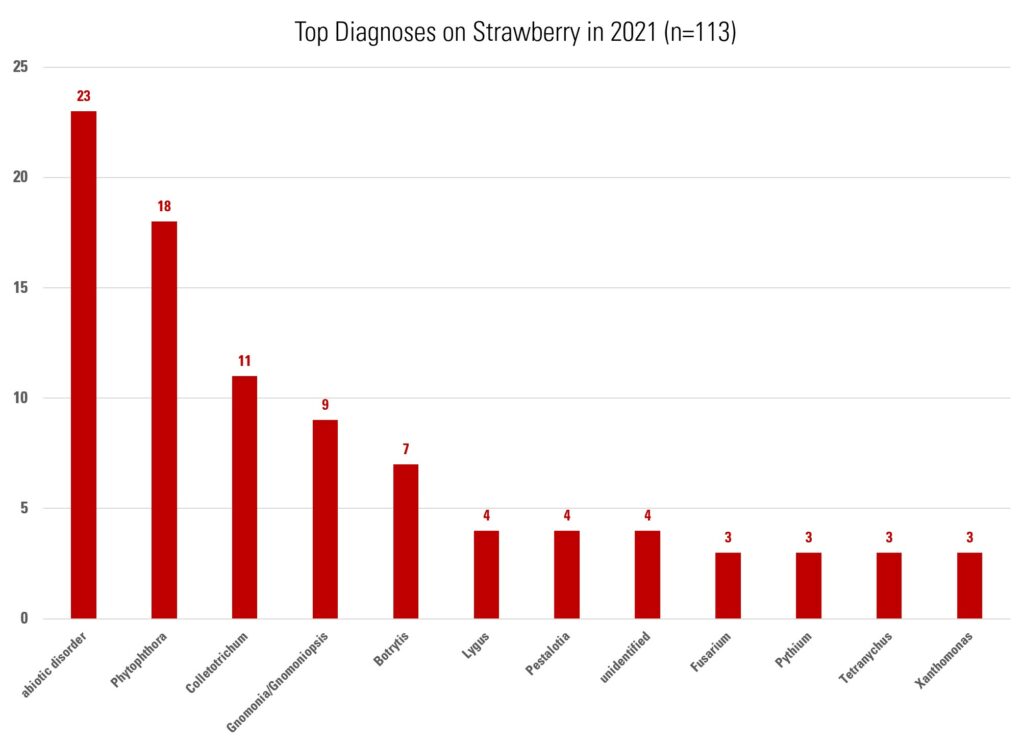 North Carolina is known as a large tobacco-growing state and the clinic receives samples of both live plants and cured tobacco for export to be tested for blue mold (Peronospora hyoscyami f. sp. tabacina); the high number of “no pathogen found” results is from this testing. Otherwise, common bacterial and fungal pathogens were identified. Of note, though, is that we haven’t received any samples of tobacco with TSWV since 2019. Perhaps it is being identified in the field… 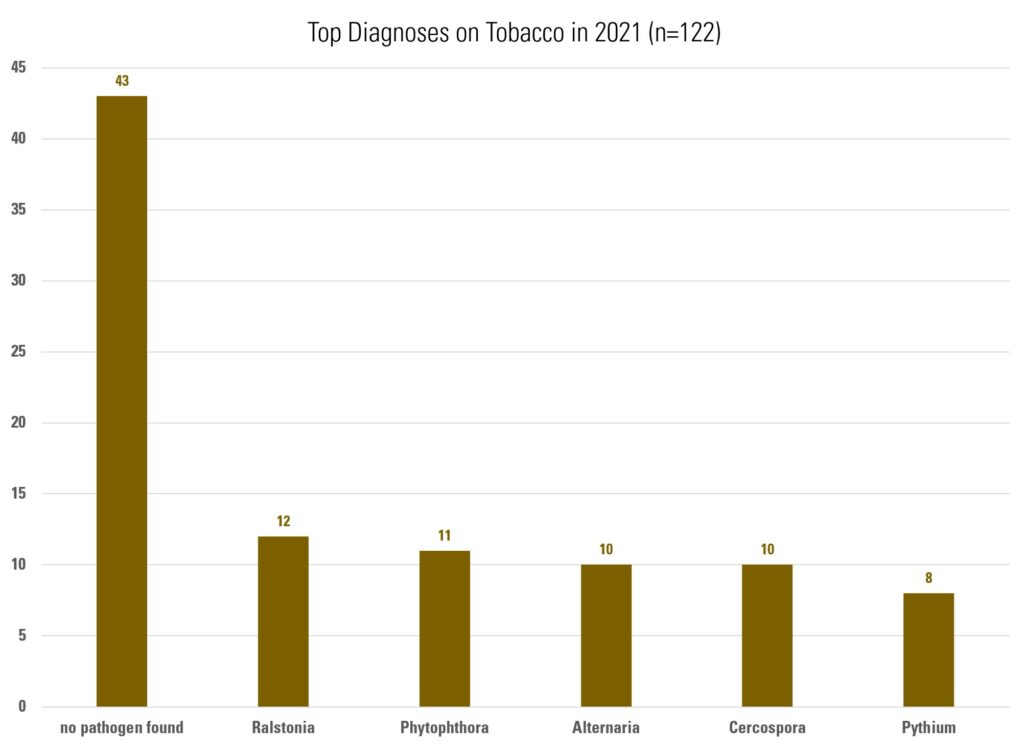 Soybean was among the top field crops submitted in 2021, and it had a suite of diseases commonly identified from it. Most of the diseases were fungal in nature, but there were also abiotic disorders. This coming season we are expecting to look for the emerging sudden death syndrome (SDS) caused by the pathogen Fusarium virguliforme. 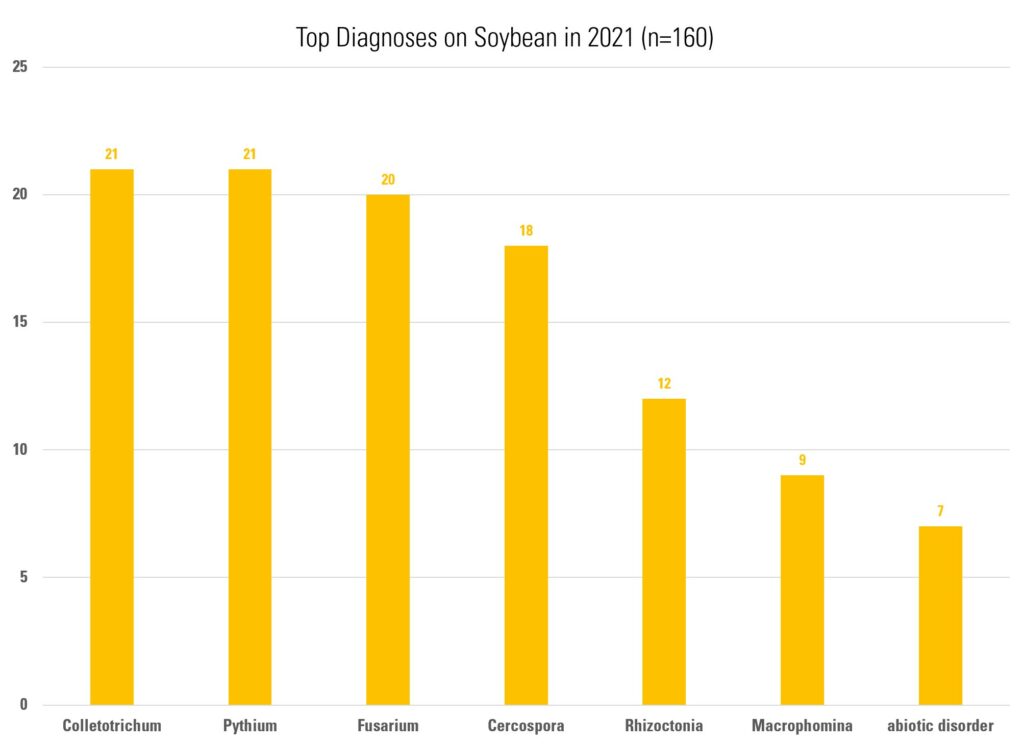 Finally, 2021 appeared to be a good year for populations of hornets, yellowjackets, and paper wasps, compounding the “murder hornet” craze (correctly called the Asian giant hornet, Vespa mandarinia). We received 152 requests for identification of suspected Asian giant hornets, but (luckily) found not a single one among these requests. Most often the wasps were European hornets (Vespa crabro), cicada killer wasps (Sphecius speciosus), or Southern yellowjackets (Vespula squamosa). For more information on how to distinguish between these insects, please refer to this guide. Below is a quick reference for the most common lookalikes: 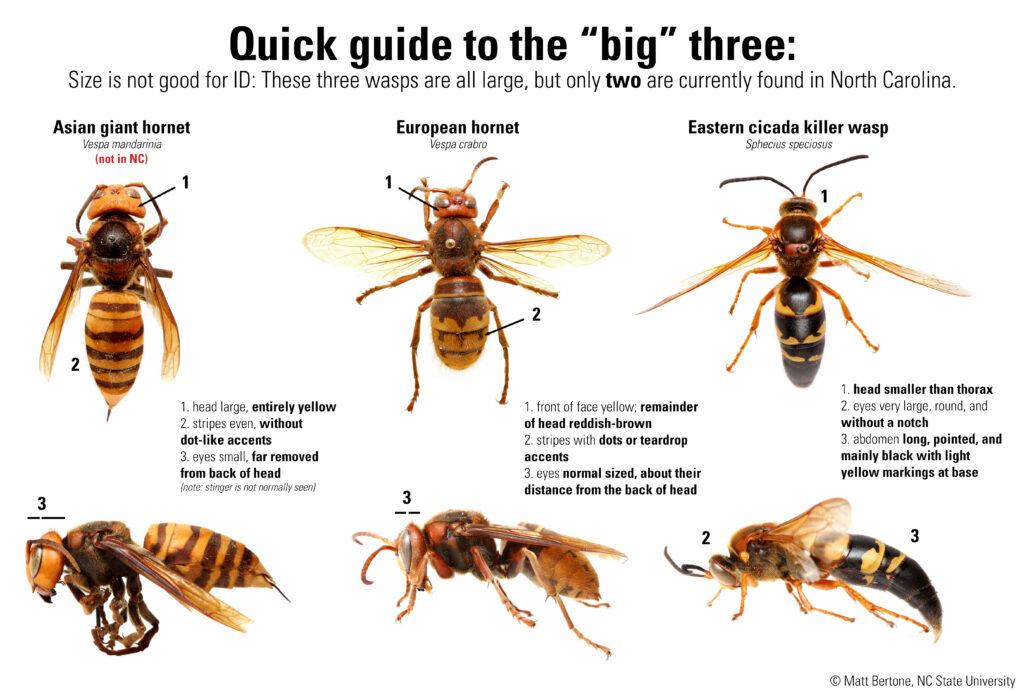 The PDIC received a steady flow of samples in 2021, resulting in thousands of diagnoses that helped homeowners, growers, researchers, and other clients identify plant problems and arthropods. Many of these diagnoses lead directly to timely and accurate management recommendations. Samples also helped agricultural extension agents and extension master gardener volunteers (EMGVs) learn to diagnose issues for themselves, by verifying the culprits (or bystanders).

Finally, we are very grateful to have so many collaborators and specialists who aid us in diagnosing related plant issues. There are too many to name individually, but we appreciate the help from members of NC State Horticultural Science, Crop and Soil Sciences, Plant and Microbial Biology, as well as specialists from the North Carolina Department of Agriculture and Consumer Services and other organizations.