Several species of “cypress”-type conifers (family Cupressaceae) are widely planted in North Carolina landscapes. Among the most common are arborvitae (Thuja spp.), Leyland cypress (xHesperotropsis leylandii), and Japanese cedar (Cryptomeria japonica). These trees are sometimes used as specimen plants, but are often placed together in rows to form screens or yard barriers.

These trees are susceptible to numerous diseases, arthropod pests, and abiotic stressors, including those caused by human activity. They also undergo changes in appearance as they mature. This step-by-step guide will help you when dealing with these issues. In some cases it will lead you to a diagnosis; in others it will lead you to the conclusion that a physical and/or image sample needs to be submitted.

Step one:
Make sure you know what kind of tree you have. The guide below was designed with arborvitae, Leyland cypress, and Japanese cedar in mind. A few of the key differences are shown on this comparison page. Other similar plants, particularly Eastern redcedar and other members of the genus Juniperus, have a slightly different suite of problems and are not included in this guide. Chamaecyparis species are likewise not included.

Step two:
Carefully observe the symptoms on needles, branches, and trunks. Look for yellowing, bronzing, needle loss, dieback, bark cracks, cankers, and resin flows. Take note of which portions of the tree are affected, and whether it’s young or older foliage that’s showing symptoms. Look for nearby stumps. These may be indications of earlier problems on the site, and can be entry points for some pathogens. Look for obvious site problems like excess shade, excess water in the soil, and shallow soil. It’s a good idea to take photos of the plant(s) so you can use them to make decisions when going through the key.

Step three:
Follow this key to narrow down the list of possible causes for the symptoms and find out what steps to take. For each numbered set of choices, decide whether “a” or “b” best describes the situation, then follow the instructions to the next set of choices. Note that multiple pests and problems may occur on one plant.

1a. Symptoms occurring on the main stem or branches, either alone or in combination with foliar symptoms > Go to 2.
1b. No symptoms on trunk or branches. > Go to 7.

3a. Horizontal row(s) of closely–spaced, round to oval holes > injury by sapsucker woodpeckers. Images are sufficient for clinic identification.
3b. Randomly scattered holes, with or without frass or sawdust coming out of them, or serpentine tracks under the bark > wood-boring insects. A physical sample or image of the insects and their galleries is needed; however these insects are most often secondary pests attracted to stressed or dying trees. Continue the guide at #4 if there are other symptoms. 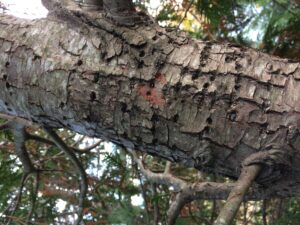 3a. Numerous shallow holes in rows or patches from yellow-bellied sapsucker woodpeckers (Sphyrapicus varius). The sapsuckers feed on sap and insects attracted to the wounds. Photo: Peg Godwin, NCCES.

3b. Left: Insect exit holes on an arborvitae stem. A pencil tip is included as a size comparison. In this case there had been weevils boring between the bark and wood. Right: Section of arborvitae trunk with bark removed to show tunnels (galleries) and holes made by weevil larvae. Many types of beetles and some other insects will feed on the trunks or under the bark of cypress-type trees. This most often happens in trees that are stressed or experiencing other major issues.

4a. Swellings on main trunk or branches, beyond which the foliage is often yellow or brown > girdling. Go to 5.
4b. Cracking of bark, often with resin flow, but little or no swelling > Go to 6. 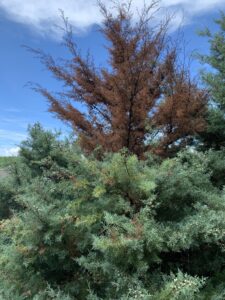 4a. Cypress tree whose leader was killed when the main stem was girdled. 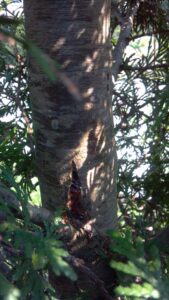 4b. Resin flowing from split bark on an arborvitae due to Armillaria root rot. Photo: Bob Filbrun, NCCES. 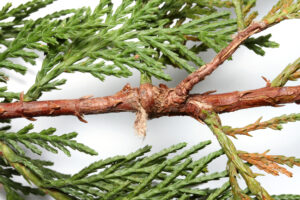 5a. Silk from a bagworm moth (Thyridopteryx ephemeraeformis) tie-off that remains after the bag is gone. The silk girdles the twig. Photo: Matt Bertone. 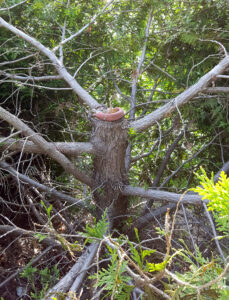 5b. Tree with top removed after a wire support girdled the trunk. Photo: Matt Bertone 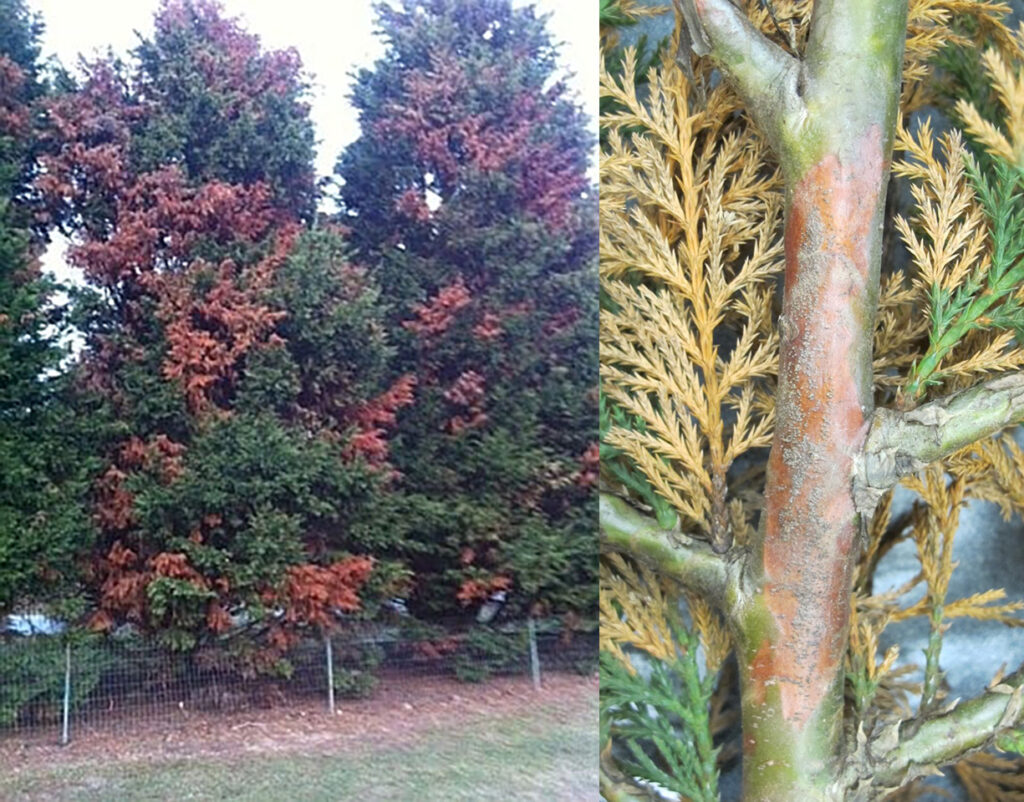 FOLIAGE SYMPTOMS WITHOUT STEM SYMPTOMS
7a. Declining and color change (yellowing, browning) are occurring evenly, on most or all of the foliage on the tree. For purposes of this key, consider each stem of a multi-stemmed arborvitae as it’s own tree > Go to 8.
7b. Symptoms are not uniform, but rather are present on only parts of the tree or parts of individual branches > Go to 13. 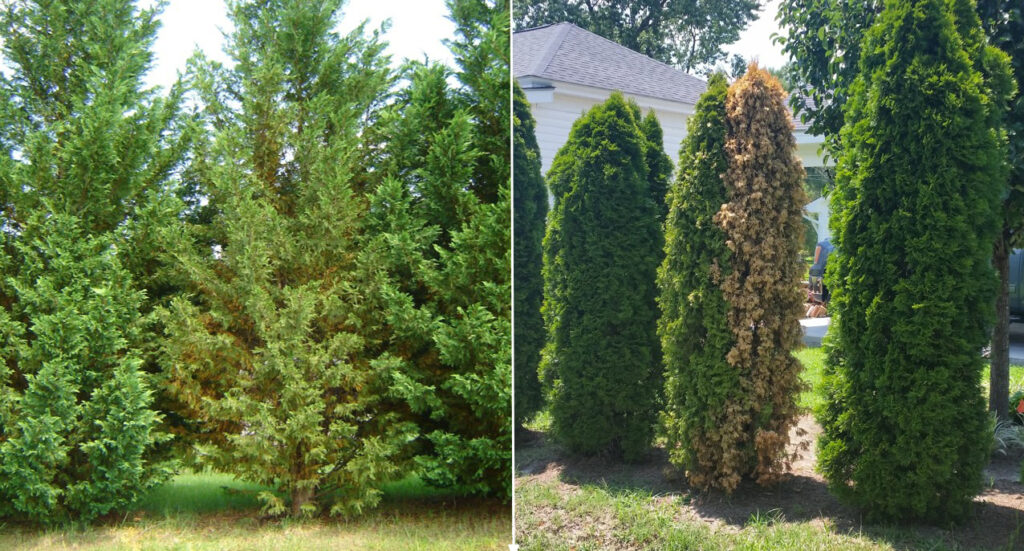 7a. Left: Whole Leyland cypress showing wilting and dull color. Photo: Shawn Banks, NCCES. Right: One stem of a multi-stemmed arborvitae is dead while the other stems and adjacent plants are alive. For purposes of the guide, consider this to be a uniform change in color. Photo: Brad Hardison, NCCES. 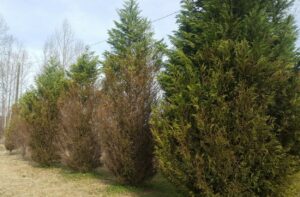 7b. Non-uniform color-change. Some needles affected but not others. Photo: Gene Fox, NCCES. 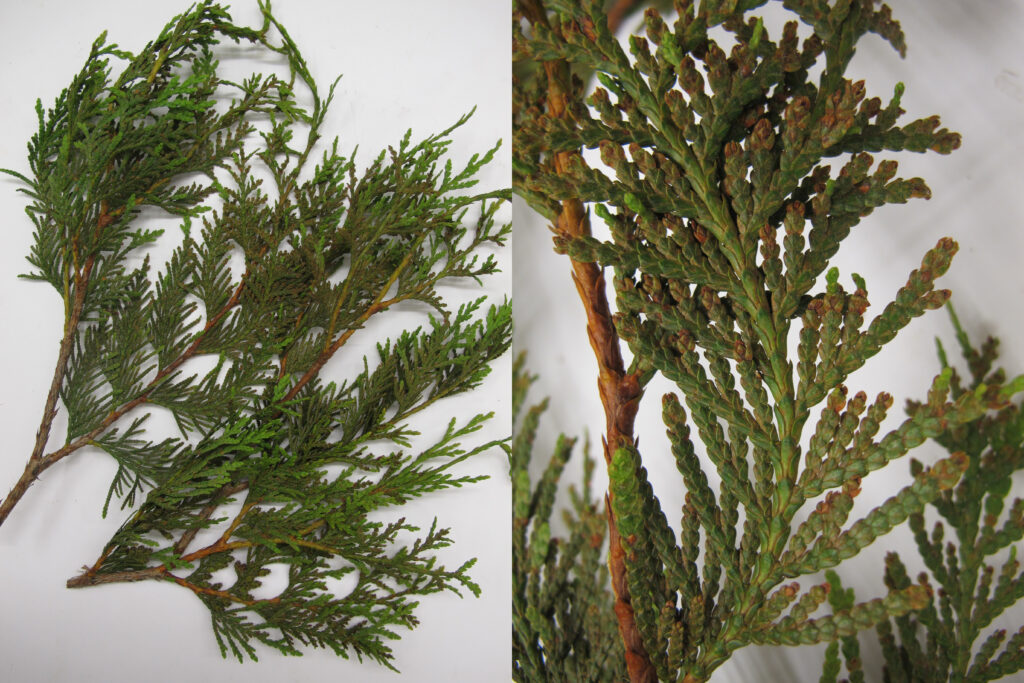 8b. A fine bronze stippling of the needles gave rise to an overall dull green color. Spruce spider mites were the cause. See below.

9a. Evidence of chewing marks in the wood of the main stem under the soil line or litter layer, chewing marks and/or pruning of major roots, missing roots, trees loose in soil; only young trees affected > vole feeding injury.
9b. No evidence of feeding by rodents > Go to 10 (but see notes below 10b). 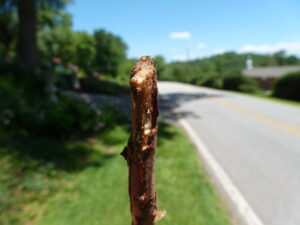 9a. Possible vole feeding on a juniper root. Note the gnaw marks as well as the clean cut at the end. Photo: Elizabeth Ayers, NCCES.

10a. Entire row of plants is affected simultaneously > likely a cultural or environmental problem (j-rooting, girdling or encircling roots, planting too deeply, transplant stress, drought stress, poor soil, excess water, normal cold-weather bronzing of Japanese cedar, etc.).
10b. Some plants in the row are affected (often one with severe symptoms) adjacent to trees with milder symptoms > likely Armillaria root rot or Phytophthora root rot, but could also be one of the problems mentioned above in 10a.

Note 1: When there’s only a single tree in the landscape, all of the above possibilities (10a and 10b) should be considered.
Note 2: Most of the scenarios above (10a and 10b) cannot be diagnosed visually (see Note 4 for an exception). A physical sample is needed, which must include roots and soil. Samples should be taken according to these instructions. If possible, some of the upper portion of the root system should be inspected to look for girdling roots or evidence of a prior pot-bound condition.
Note 3: A simple test for root rot is to pull on a section of root, to see whether the outer portion will easily separate from the inner vascular tissue. This indicates root rot.
Note 4: Armillaria root rot can sometimes be diagnosed in the field if the tree has declined to the point where destructive sampling is an option. Peel back the bark at the base of the main stem and from the largest roots, to look for a cream-colored mat of fungal mycelium. 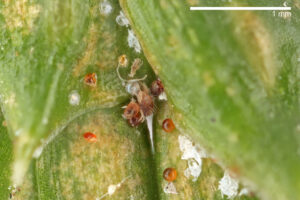 12a. Spruce spider mites (Oligonychus ununguis), shed skins, and eggs/egg shells among the needles of an arborvitae. Note the small size of these pests and the patches of diffuse yellow damage. Photo: Matt Bertone 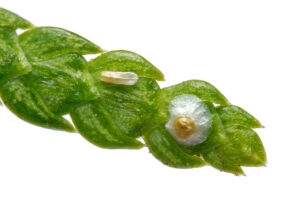 12b. A male (left) and female (right) cypress scale (Carulaspis sp.). Several species of armored scales can be commonly found on cypress-type trees, often in low and non-damaging numbers. Others look like oyster shells. 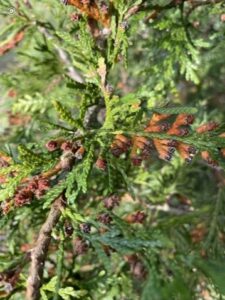 14a. Cones of arborvitae and Leyland cypress are usually inconspicous but can be mistaken for a symptom of a problem. Photo: Black Lawn and Landscaping, used with permission. 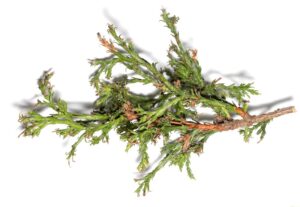 15a. Host is Japanese cedar, and ends of twigs or sometimes sections of twigs below the tips are browning, with or without individual spots on needles > cause unknown but not likely an infectious disease as far as we can determine.
15b. Host is arborvitae or Leyland cypress > Go to 16. 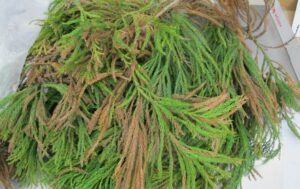 15a. Most cases of twig dieback on Japanese cedar have defied explanation.

16a. No pattern to damage; close examination shows tiny caterpillars in conical “bags” of plant tissue, feeding on needles > bagworms.
16b. Damage preferentially on either younger or older needles > Go to 17. 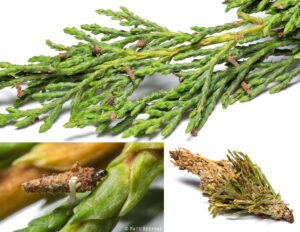 16a. Plate showing bagworms (Thyridopteryx ephemeraeformis) on an arborvitae. Top: multiple young bagworms on a branch. Bottom left: an individual young bagworm with small bag made from fine debris; this is the most susceptible stage for chemical control. Bottom right: mature bagworm caterpillar, now using twigs for the bag; this stage is difficult to control with chemicals, but can be hand collected and destroyed.

17a. Older needles changing color while newest growth looks good > Go to 18.
17b. Newest growth (needles or branch tips) turning orange, tan, or brown while the older foliage is less affected or unaffected > Go to 19.

18a. Older needles and/or twigs yellowing, browning, and dropping at multiple heights on the tree. Common on arborvitae in the fall but may also happen on Leyland cypress> internal browning (shading out) and normal fall shedding of older needles.
18b. Older needles turning brown individually or along sections of twigs, beginning in the lower portion of the tree and working outward and upward. Youngest needles not affected at first. From a distance, portions of the tree may look “burned”. Common on Leyland (and some other conifers like Eastern redcedar), but not on arborvitae. With a hand lens, tiny tufts of olive green spores may be visible > Passalora needle blight. (Mentioned in this bulletin from Clemson Cooperative Extension.) 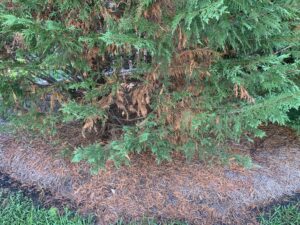 19a. Tiny larvae (caterpillars) found boring within the dead portion of the twig tips, leaving holes and powdery fecal pellets (frass); arborvitae > arborvitae leafminer (Argyresthia).
19b. No signs of insect in twig tips. > Go to 20. 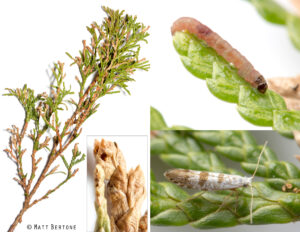 20a. Tips of scattered branches of Leyland cypress dying at any time of year, often slightly orange-colored, and with a sharp transition between the living and dead wood > Seiridium canker. (Mentioned in this bulletin from Clemson Cooperative Extension.)
20b. Needle death associated with cold, dry winds in the winter, possibly worse on the sunny side of the tree. Uncommon on conifers in North Carolina. > winter injury/desiccation. For more information see the Winter Burn article from Wisconsin Horticulture. 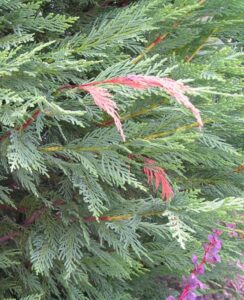 20a. The fungus Seiridium girdles and kills branch tips on Leyland cypress, often turning the needles an orange color. 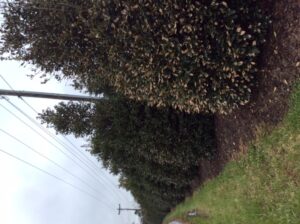 20b. Suspected winter injury on a row of hollies. Photo: Kathryn Holmes.