Find this article at:
go.ncsu.edu/readext?474975
— Written By NC State Extension

Things have finally settled down a bit here at the NC State Turf Diagnostics Lab thanks to some colder and drier weather in our region. Since 2015 was warmer and wetter than normal, we saw some strange things in the turfgrass disease world as well. All the fun weather facts aside, let’s talk disease!

WARNING! – These charts only indicate the samples we have received in our lab here at NC State. While we do receive samples from just about every state in the country, the majority (~80%) of our samples come from creeping bentgrass and bermudagrass putting greens in the southeastern United States. The following post only covers data collected from golf course samples. A similar landscape version will be posted soon.

We typically only receive samples from cases that are very hard to diagnose in the field alone. Simply put, we get the funky stuff! Therefore these charts don’t necessarily represent the major disease outbreaks, but illustrate what causes the most head scratching if you will.

First, let’s take a look at which cultivars and varieties we receive the most. This is NOT an indication of one being more susceptible to disease or problematic than another. This was compiled from thousands of samples and would likely match any survey that asks “What do you have planted?” Remember, we receive most of our samples from the southeastern US with the majority of those coming from right here in North Carolina. 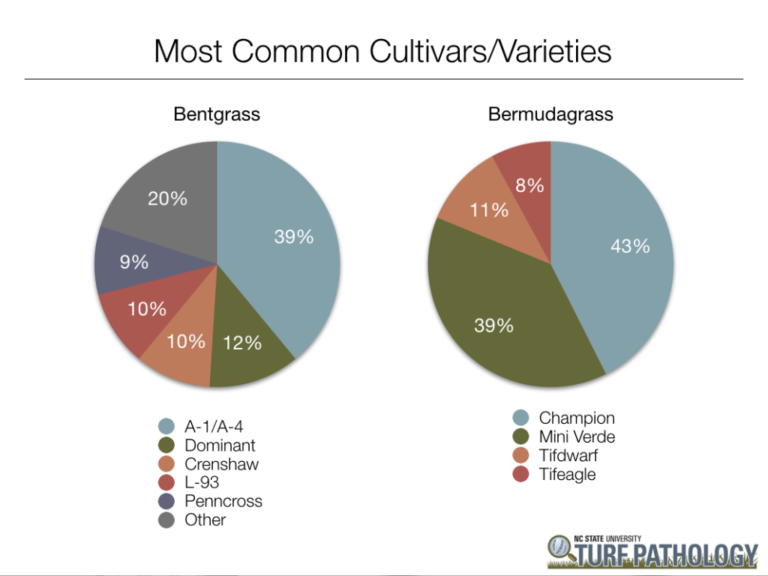 Next, let’s take a look at actual disease diagnoses. If you remember from an earlier post, the majority of the time we do not find any active disease causing organisms in samples. This could be due to any number of factors such as it never was a disease, it was a disease and the damage was done too long ago to detect, or it was a disease and you’ve suppressed it with your fungicide program. I’m looking right at you folks who send samples after spraying everything in the barn BEFORE you take your samples! 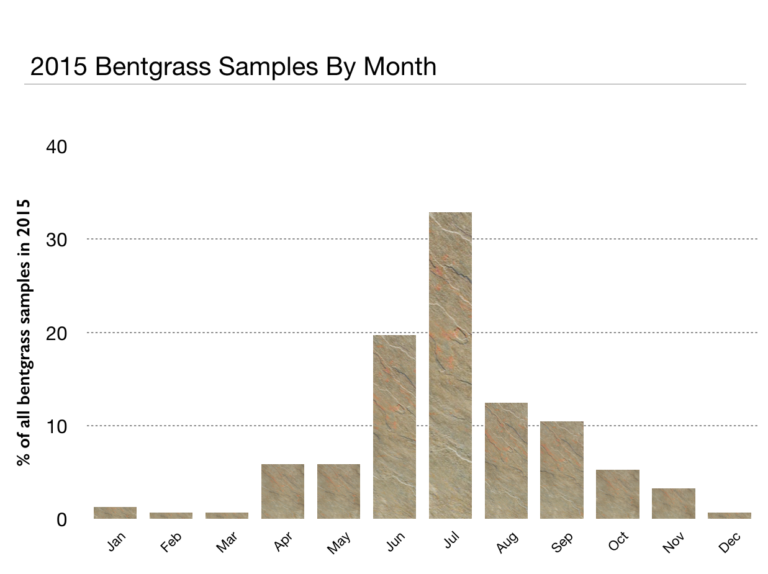 For the most part, creeping bentgrass samples followed the same trends we observed in 2014. The yearly chart above is usually about the same with the majority of samples coming during periods of stress between June and September as it always has been since we started tracking this information back in 2008. 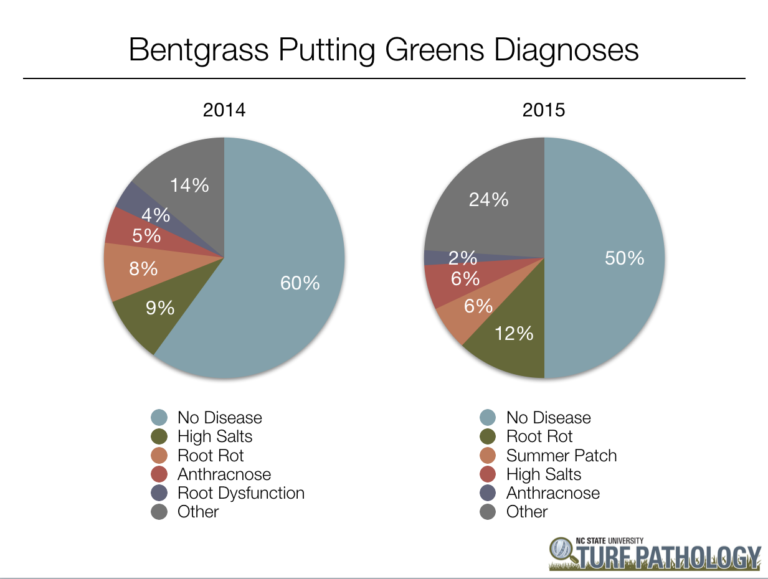 Now, think about all of the problems listed on the pie chart above. With the exception of summer patch when it creates nice little rings, they all look the same! It’s very hard to diagnose any of these diseases in the field with 100% accuracy without looking under a microscope or testing for high salt levels. Once again, remember that rarely do growers send us samples of things like fairy ring, brown patch, dollar spot, etc. that are relatively easy to diagnose in the field. 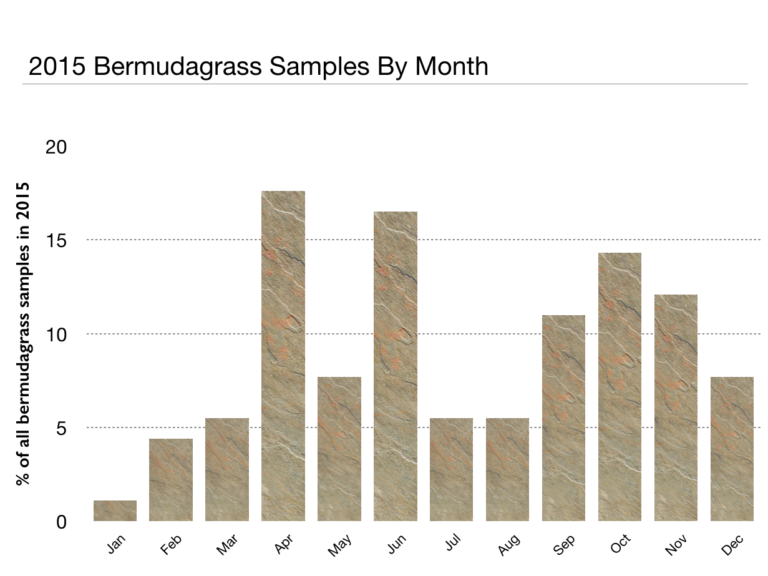 Just like the bentgrass chart, the bermudagrass chart follows a very similar path each and every year. The majority of problems are during stress periods and for bermudagrass that is in the spring and fall. 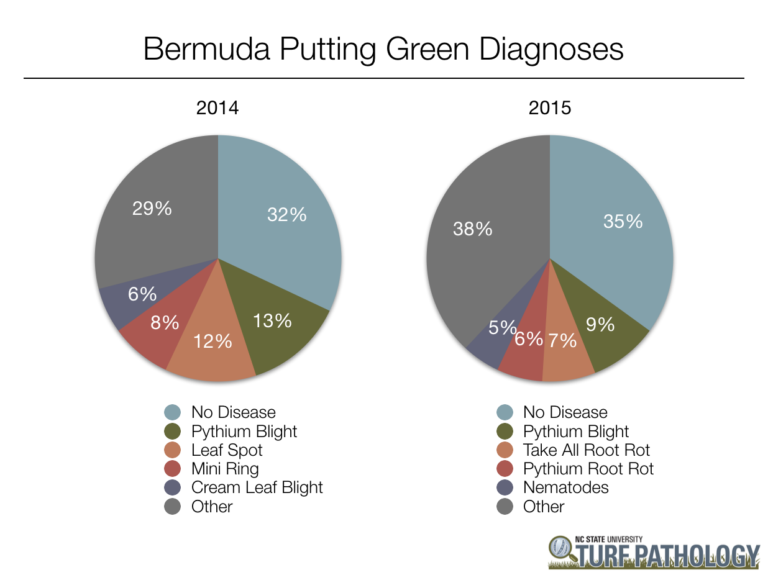 We did notice some differences in 2015 vs. 2014 with regards to bermudagrass samples. For one, mini ring did not make the top 4. There were several cases of it diagnosed, however most people have learned how to diagnose that one on their own or we will confirm their suspicions via photographs, so very few physical samples are sent for confirmation. Cream leaf blight was a fad in 2014 primarily due to us blogging about it which peaked people’s curiosities and the samples came pouring in.

Finally, the thing that sticks out the most about 2015 with bermudagrass is, aside from nematodes, the diseases listed are all associated with wet weather. The warmer/wetter fall in this area brought a big flush of samples with take all root rot (a.k.a. bermudagrass decline) and Pythium blight to close out the year. In addition, you notice leaf spot isn’t on the list for 2015. We only diagnosed a handful of samples with leaf spot and those are lumped in the “other” category. It will be very interesting to see what 2016 has in store for us!

Bottom line: As you can clearly see, both bentgrass and bermudagrass have their fair share of disease issues!